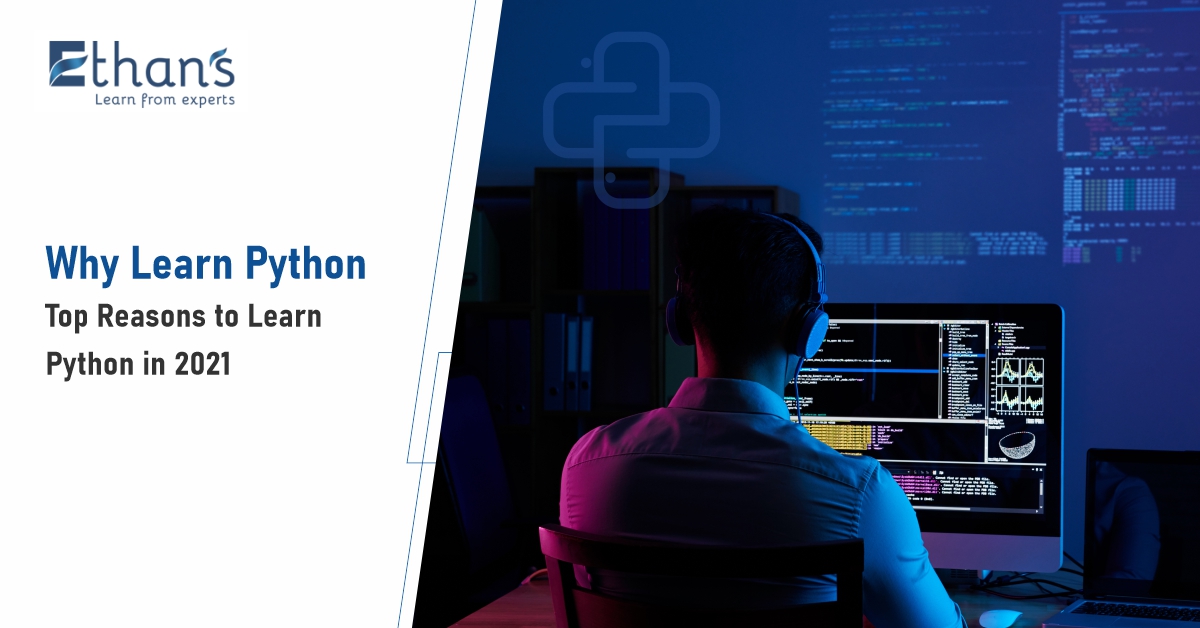 One of the first and foremost reasons to learn Python is that the language is very easy to learn and that is why it is getting popular day by day in India as well as abroad. Python has a universal appeal and let it be data science, Big Data, application development, and coding Python can find its way anywhere and is applicable almost everywhere in any industry; that’s who much versatile Python is! For learning Python, you just have to know Basic English and Mathematics and that’s it. You don’t have to worry about syntax or anything else.

Python in its simplest form always emphasizes simple readability and ergo, it has the potential to reduce the incurred cost of maintenance as well as programs. Python supports modules and packages while app development and coding and this feature of Python promote program modularity and code reusability to its core. For beginners as well as professional coders Python interpreter along with its standard library are always available to the programmer. This library is binary and it can be accessed without any in all platforms, this makes Python freely distributed everywhere. Python has so much to offer and for this simple reason, Python has been declared as one of the most loved programming languages of 2020.

Python comes in handy if you want to get introduced to web development. So, if you are a candidate that aspires to become a web developer which is one of the most in-demand skills of the 21st century because every business irrespective of its size needs a website, Python can make their lives easier. Are you thinking how? For your information, Python comes with a wide range of innate web development frameworks such as Django, Flask, Pyramid, TurboGears, Web2Py, Bottle, CherryPy, Hug, Falcon, Sanic, and FastAPI, just to name a few; a web developer can utilize any of these or a combination of two or more to make web development look like a cakewalk. All these Python frameworks can assist web developers to code effectively and faster. A web developer can automate the implementation of standard solutions and with this, a developer can reduce the time required to develop a website. The saved time can be used to focus on other critical elements such as application logic.

So, now you know why you should learn Python in 2021. But to be honest, this was just an introduction. When you will see other interesting (all covered in this blog) – your inclination towards Python will increase even more. So, without any further ado, let us see more reasons to learn Python.

7 Reasons Why You Should Learn Python

According to LinkedIn, the world’s largest employment-oriented online service, Python is one of the top skills to learn in 2021. Python has huge demand in every industry and the growth has been drastic in the past 5 years and the reason is quite simple – usability! One of the best factors about Python is that it can be learned by anyone and within 6 months and 2-4 hours of practice every day, any enthusiast can become an intermediate programmer from a basic level programmer. Another programming language takes years but this is not the case with Python.

Python is also utilized by several top MNCs for recruiting, healthcare, financial services, marketing, education, etc. For instance, a start-up organization names ‘Growth Marketers’ are nowadays taking their marketing decisions after getting the analysis done in Python. Many organizations are now abandoning the typical and legacy systems like Excel spreadsheets and are using Python as an effective business strategy.

Even top-level civilian space programs like NASA are using NASA. This is difficult to believe but there exists a workflow automation system for NASA which was written in Python by a programmer in less than a year! If any other programming language would’ve been used it might’ve taken years to complete the task. Python is also interesting to learn because there are several books, online tutorials, videos, and bootcamps available online that make the whole process a lot easier.

Learning Python in 2021 is a must if you want to get welcomed by private and public sector organizations. Remember, top HRs and recruiters are always looking for a candidate with a certification in Python. So, if you have determined to become a Python programmer, the time is high to start your journey in learning Python. With passion, dedication, and hard work you will become an expert coder in no time.

Here are the 7 reasons why you should learn Python

Python has the simplest of syntax as compared to any other language and also, the lines of coder are fee; in Java and C++ you will have to write 10 lines of code to get a simple task done but it can be done in just 2-3 lines of code in Python. This is unique to Python and a learner would never find this cool feature in any other programming language.

Python has a huge scope and in the coming time, the demand will hike even more because more industries are adopting Python for the ease of their operations such as robotics, healthcare, space and sea exploration, entertainment, and social media. This is the reason why hundreds of thousands of candidates are enrolling themselves to learn Python in 2021.

3. Myriads of Frameworks and Libraries

Another reason to learn Python is that you can get assistance from many libraries and frameworks while working on a project. For example, Django can be used for web development, PyBrain is used for data science, Tensorflow is used for machine learning, and more. All these ensure that the entire process of developing an application easier and smoother. The frameworks and libraries can be utilized as per the requirements of a developer.

You will be glad to know that several cross-language operations can be done hassle-free on Python and the reason is quite simple – Python is portable as well as extensible! Python is supported by various platforms like Windows, Linux, Solaris, and Macintosh. Additionally, Python can be integrated with other languages such as Java, .NET as well as C and C++ libraries if a developer wants to build an app on multiple languages, which is super-unique.

The Internet has more than thousands of groups and communities that are completely dedicated to Python. You can take help or assistance from pro-level programmers and experts if you want to learn Python. You can ask group and Python community members if you are stuck somewhere and also, you can take guidance from senior members and your friends offline if you are doing a project and want to find a solution to a Python-related problem ASAP.

It is true that many people don’t know the fact that apart from being a programming language, Python can also be used as a scripting language. In the context of scripting

a) The code is written in scripts and then it gets executed.

b) The machine reads and then interprets the code

c) Errors are checked in real-time

This particular feature can be used several times once the code is properly checked and once it is done you can use it to automate certain tasks and functions in a program.

7. Python is Perfect for Developing Prototypes

Python is the best platform for developing intricate prototypes that demand great precision and diligence. Pythons let you do a lot more with less amount of code and it is useful to assist you in building the simplest of ideas as well as prototypes in a quick manner. In a programming language, most of the time is taken for but the same never happens when it comes to Python.

Interesting Stats and Facts about Python

So, now you know why you should learn Python in2021! If you are willing to thrive in the modern world and build a name for yourself and make others follow in your footsteps then nothing comes close to Python. Learning Python will open several doors of golden opportunities and you will have a prosperous life and a happier career. With Python, you can etch your name in the good books of your employer and climb the ladder of success quicker than others.

Why Pursue a Python Certification Course from Ethan’s Tech?

Ethan’s Tech is a reputed professional training institute in India for learning Python. We’re dedicated to make you a top-level Python programmer so that you can make all your dreams come true by getting placed in the top MNCs of the world. You will learn from highly experienced mentors, instructors, and industry pioneers to get your concepts crystal-clear. Join hands with us to stay ahead of the curve and at the top of every competition.